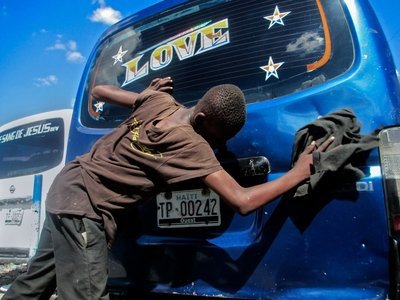 In the one-hour special, Haiti Untold, we tell a story of Haiti that is not often heard: the hope, the pride, the creativity and the proud independence of the people. Our teams of reporters spent months tracking down important stories and authentic voices. Upbeat stories about Haitians returning to their home country from the US, bringing passion, commitment and expertise to help Haiti thrive; troubling stories about human trafficking across the border with the Dominican Republic, and stories about urbanization, the MeToo movement, and recycling efforts in Haiti.

Listen to the radio special

Music is an integral part of life in Haiti &ndash; you hear it everywhere: in the stores, the slums and the swanky hotels. Haitian musician Michael Brun is making a name for himself on the international music scene, melding traditional music of Haiti with Electronic Dance Music. Michael sat down with us to talk about his desire to disrupt and reframe the negative stereotypes of Haiti that suffuse media coverage of the country.

Listen to the full interview with Michael Brun

The documentary is hosted by Carline Desire who lives in Boston but is originally from Haiti, and by Conrad Fox, a Canadian journalist currently living in Mexico. The stories were contributed by Phares Jerome, Vladimir Ridore, Amy Bracken, Michel Joseph and Aida Alami.

Haiti Untold is being broadcast by many public radio stations across the country, from KQED in San Francisco, to WBUR in Boston- and many in between. Check your local stations to see if it is airing Haiti Untold, from Round Earth Media.